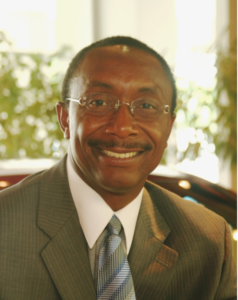 The Kappa Detroit Foundation Development Center, our new home, is the cornerstone of Detroit Alumni Chapter for the next 100 years of achievement.  Our current leadership of Polemarch Charles Hicks, Vice Polemarch Glenn Moore, and a progressive Board of Directors stand on the shoulders of past leadership fortifying the commitment of brotherhood.

When the Kappa Detroit Foundation Development Center needed funding, Brother Marlin Parks, Capital Campaign Chairman for the Foundation Center, enlisted several men with the skills to make the campaign a success.  Brother Gregory Jackson was at the top of Brother Park’s list.

Brother Gregory Jackson is a 1977 initiate of the Beta Delta Chapter, Morris Brown College.  A native Detroiter and a Life Member since 1988, Jackson has been financial since his initiation.  He earned his B.S. in Accounting from Morris Brown College and M.S. degree in Finance and Marketing from Atlanta University in 1981.  He is married with two children.

He began his professional career as an accountant for Arthur Anderson & Company.  He left in 1984 and was hired as a controller for Stroh’s Brewery, the youngest individual in company history to hold this position.  While at Stroh’s, he launched the Kastellton Company, a gourmet cookie venture.  He was one of the first African Americans to have a concession selling cookies at Detroit Metro Airport.

In 1988, he entered the General Motors Minority Training Leadership Academy.  He completed the program and was armed with the skills to seek a new entrepreneurial challenge within the automobile industry.  He launched the Prestige Automotive Group and purchased his first dealership, Prestige Pontiac-Oldsmobile, in 1993 in Mt. Morris, Michigan.  His hard work and dedication to quality service allowed him to purchase 18 dealerships over the years.  He was the first minority dealership to earn a billion dollars in sales.  Under his leadership the company grossed $1.67 billion in sales in 2005.  He has been recognized by Black Enterprise magazine for his continued success and for achieving a billion dollars in sales over 10 years that highlights his accomplishment as the Number One African American Dealer for sales.  Selling the majority of his dealerships, he continues to own four including Mercedes-Benz of St. Clair Shores, MI; Toyota of Warren, MI; Courtesy Ford of Okemos, MI; and Prestige Cadillac, Warren, MI.

Expanding his business portfolio into real estate, Brother Jackson owns multiple properties in Downtown Detroit.  The crown jewel is the luxury high-rise Lafayette East Towers.  The Copper Ridge Golf Course in Davison, MI, is part of his Real Estate holding.  He is the only African American golf course owner in Michigan and one of the few within the United States.

In the field of entertainment, he has sponsored a free Jazz Series at the Roberts Riverwalk Hotel on the Detroit River for several years.  This venture is in collaboration with Brother Michael Roberts of the St. Louis Alumni; Brother Roberts is a wearer of the Laurel Wreath.

Brother Jackson served as president of the General Motors Minority Dealers Association and president of its Board of Directors.  He also serves on the Board of Directors for the Automotive Hall of Fame; he was the first vice chairmen of the Board of Directors for the National Association of Minority Automotive Dealers and served as a council member for the General Motors Minority Dealers Advisory Council.  Brother Jackson sits of the boards of Henry Ford Health Systems, the National Automobile Directors, and Morris Brown College; he is the Vice Chairman of Rainbow Push.   Jackson is extremely proud of his commitment and services to Fellowship Chapel, his church home.   He is an active member of the National Association of Black Accountants and the NAACP.  His philanthropic and charitable activities include Morris Brown College, funding recertification initiative; the Kappa Detroit Foundation; Detroit Delta Foundation; and Homeless Children & Children of Incarcerated Parents and Generation With Promise – student ambassadors for healthy living.

Brother Jackson’s entrepreneurial successes have become international.  In Ghana, he was honored and adopted into the Royal Kubbi Ocansey Family, making him a Regent King. He is involved in two separate Chinese-American joint venture corporations in Beijing and Wuhu, China, in the production of tea-based beverages and organic milk.

Over the years, Brother Jackson, has received numerous recognitions and awards.  The National Association of Automobile Dealers recognized him with a Lifetime Achievement Award.  Other awards and recognitions include the NAACP Freedom Award; Black Enterprise recognized Prestige Automotive for 27 years of success for over a decade, Prestige Automotive Group received top ranking on Black Enterprise’s “Auto Dealer 100” list and held the number one position for six years.  The company also received Mercedes-Benz’s Best of The Best Award, and Brother Jackson received   the Michigan Chronicle’s Men of Excellence Award and its Man of the year Award.  He was named Black Enterprise’s Dealer of the Year and was featured in Crain’s Detroit Business’ “Largest Minority-Owned Business” publication.  He was the Kappa Alpha Psi, Northern Province Founders’ Day Speaker.  Brother Jackson has addressed the CRWLC and the Detroit Kappa League.