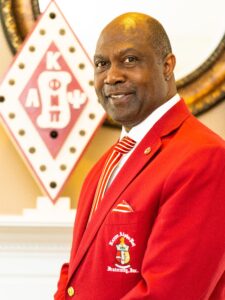 Michael L. Kinloch is currently a member of Ann Arbor-Ypsilanti-Inkster Alumni Chapter. He is a charter member and serves as the president of the Diamond Achievement Foundation for the Northern Province. Brother Kinloch is a life member and was initiated at Alpha Lambda Chapter, South Carolina State University in 1978.

He was awarded the Lifetime Achiever Award from his fraternity local chapter in January 2015. His local chapter established and award in his honor, “The Kappa League of the Year Award” in 2016. He received the 2012 Kappa Alpha Psi Fraternity, Inc., Northern Province Brother of the Year Award. In 2009, he became the 75th member to receive the Province’s highest award, the Robert L. Gordon Achievement Award.  He also received his chapter’s highest award, the Jesse A. Rutherford Humanitarian Award in 1989 and received the Charles E. Beatty Alumni Brother of the Year Award from his chapter in 1987 and 2013.

He is married to his college sweetheart M. Elaine (Venning) Kinloch (Delta Sigma Theta Sorority, Inc.) and currently resides in Canton, Michigan. Together they have two sons, Ramon, and Tyler: both members of our Fraternity.  Ramon (Sigma Chapter 2007), a member of Cedar Hill - Mansfield Alumni and Tyler (Ann Arbor-Ypsilanti-Inkster Alumni Chapter 2016) is a member of Boston Alumni.

Currently, Brother Kinloch and his family are members of Triumph Church in Northville, Michigan. He also served on the Board for the NAACP-Ypsilanti Branch, Wayne Westland Youth Athletic Association, and SCSU Advisory Council. He is a Subscribing Life Member of SCSU Alumni Association and a member of the Society of Automotive Engineers. He has received numerous awards for civic and community contributions as well as other achievements. He thanks God for helping him reach such achievements.