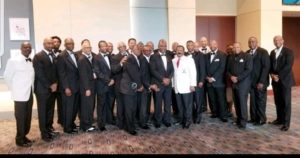 Brothers from the Northern Province were recognized for achievement during the 84th Conclave:

View all posts by: Matthew Gillery